I was sent on a Top Secret mission by the BBC a few weeks ago, my task to infiltrate a gold-plated briefcase containing 22 James Bond Blu-rays that had been dispatched from Eilean Donan Castle on its way to the small Argyll town of Lochgilphead as part of 007 Days of Bond.

Luckily it wasn’t quite so Top Secret that I couldn’t tweet the odd photo and record and edit a package for BBC Radio Scotland’s Movie Cafe.

I flew in a helicopter (here’s some footage captured on my iPhone), visited a location that doubled for the Adriatic in 1963’s From Russia With Love, met the original Bond Girl, the now 84-year-old Eunice Gayson, and got soaked in the process on a wet Argyll afternoon, but it was still a fantastic day for a 007 nut like myself.

The segment can be heard over on iPlayer for the next few days: 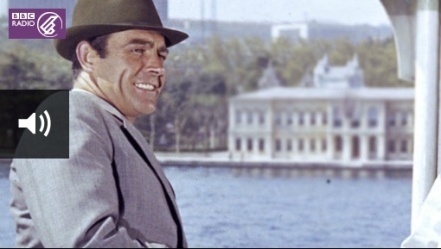 My 50th anniversary Blu-ray set arrived in the post a few days later, here’s the trailer if you haven’t ordered yours yet: