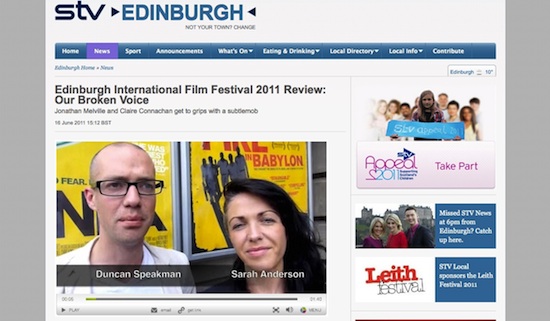 In 2011 I’m celebrating my fourth year of attendance at the Edinburgh International Film Festival (EIFF) in a professional capacity, and it’s the year that my involvement in the Festival has changed the most.

Wheras in the past I’ve turned up to press screenings and written opening and closing night reviews for the Edinburgh Evening News and my own blogs or websites, this year I’ve found myself looking at the bigger picture for a number of outlets as freelance opportunities come my way.

As well as commenting on the controversial changes to the EIFF in the paper, I’ve been covering the Festival for local news website, STV Edinburgh, mainly focusing on the special events that make up roughly half of this year’s programme. This is a return to STV for me following some work at the end of 2010 on their YouTube/archive service.

My first piece, in conjunction with local writer Claire Connachan, saw me filming an interview with the creators of a subtlemob, Our Broken Voice. The first feature went live last Thursday and within a few hours had rocketed to the top of Google News results for the Festival and remained there for 24 hours, with more articles to come in the next few days:

As well as commenting on the EIFF from a critical perspective I’m looking after the blog for a new Creative Scotland-funded website, ScottishFilms.com. The site has existed as an online videotheque for a few years now, showcasing some of the best Scottish filmmaking talent in a password protected area, but last week saw the launch of phase one of a new blog, part of which I’ll be looking after.

With the EIFF the place where many filmmakers are congregating I’m trying to make contact with some of them for future site content while working with the behind-the-scenes team to ensure some footage from the any industry events can be seen on ScottishFilms.com. The site will get another facelift soon and I hope to build it into an important resource for Scottish filmmakers.

Finally, as well as being asked to interview the charming and self-effacing CEO of IMDb, Col Needham, on stage on Sunday, my other involvement this year comes in running Scottish film website, ReelScotland, which I launched just over a year ago. Although the above work makes it impossible to attend as many films as in previous years, a small team of writers are currently taking the strain, providing a high quality range of reviews and interviews. I’m merely the editor for much of this, though I do hope to see at least a handful of films alongside the special events.

All-in-all it’s been a pretty exhausting EIFF already, but I wouldn’t want it any other way.